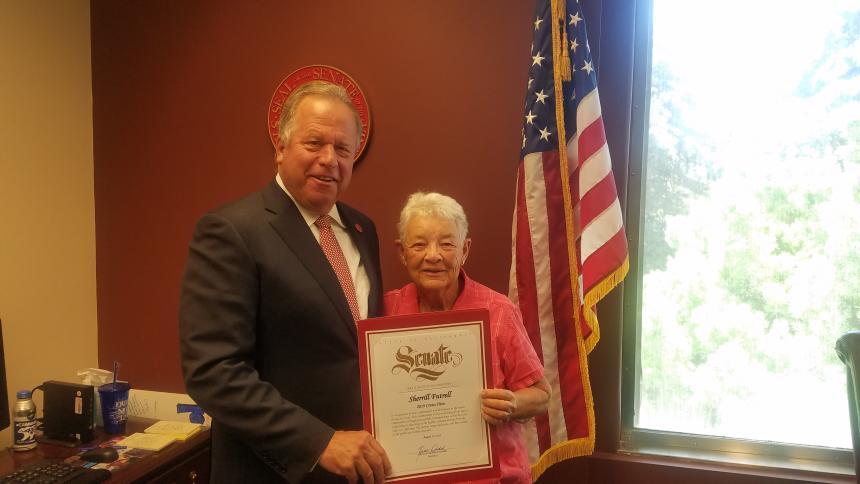 SACRAMENTO – Davis resident Sherrill Futrell is not afraid to share her opinion with her political representatives or ask tough questions. The retired high school civics teacher considers it her duty.

Her passion – as well as the 258 emails she sent to Sen. Bill Dodd over the past five years – has earned her a special distinction as the most civically engaged resident of Senate District 3. Sen. Dodd honored Sherrill with a certificate of recognition earlier this week.

“Sherrill is incredibly thoughtful and engaged,” Sen. Dodd, D-Napa, said today. “It’s not surprising that a former civics teacher is so community-minded. I really appreciate hearing from the people I serve, and Sherrill is an inspiration when it comes to speaking out to improve our state.”

After graduating from UC Berkeley, Sherrill taught at Dixon High School for 34 years before retiring in 1998. She remains active in civic and community affairs in Davis, and volunteers as a researcher and writer for the UC Davis History Project.

Sherrill regularly corresponds with her representatives, expressing her opinion on issues ranging from environmental protection to social justice. Over the five years Sen. Dodd has served in both houses of the Legislature, she has sent more emails than any other constituent.

“I’m a civics teacher so of course I’m going to be pestering our elected officials,” Sherrill said. “It’s because I care. It is important.”

Sherrill believes civics education has never been more important than it is today. She supports the idea of teaching it at a younger age and more often.

“It’s essential for democracy, which is being attacked in this country as we speak,” Sherrill said. “As a society, we must do a better job of educating our children. We owe it to young people to give them the tools they need to continue our way of life.”