SACRAMENTO – Sen. Bill Dodd, D-Napa, today lauded the creation of a statewide plan for home and community hardening through a partnership between Gov. Gavin Newsom and Insurance Commissioner Ricardo Lara that will reduce wildfire risk, save lives and help make home and business insurance available and affordable to all. 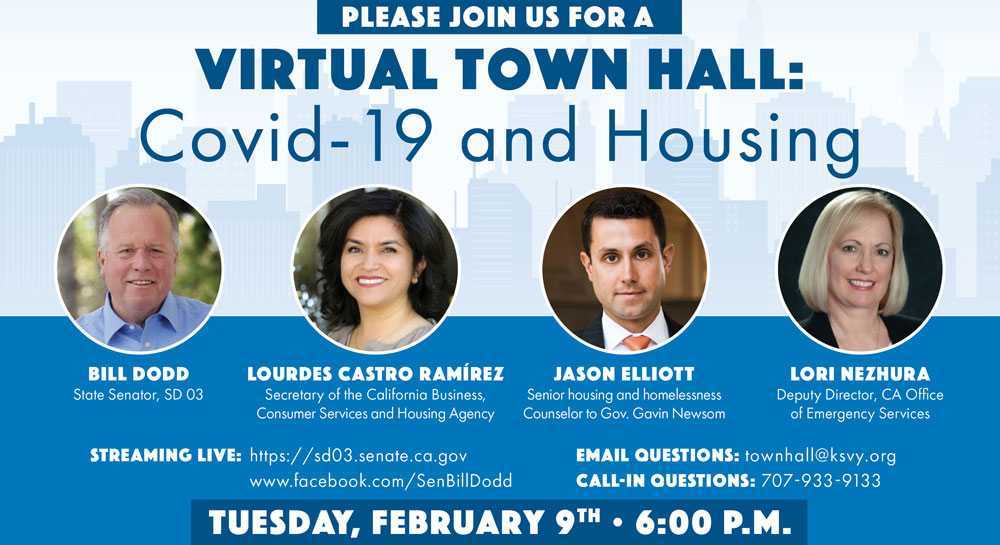 SACRAMENTO – With high COVID-19 infection rates at California nursing homes, Sen. Bill Dodd, D-Napa, introduced legislation today to expand a successful program that allows low-income seniors and people with disabilities to receive care in the safety of their own homes.

“With the economy reeling and so many people out of work, it is absolutely essential that we help people struggling to keep a roof over their heads,” Sen. Dodd said. “Extending the eviction moratorium is a commonsense measure to support tenants and landlords. It is one of the key steps we are taking to ensure California’s economic recovery as we beat this pandemic.”

SACRAMENTO – With the release of a new study showing low-income Californians are struggling to afford drinking water, especially amid economic fallout of the coronavirus pandemic, Sen. Bill Dodd, D-Napa, announced legislation today to provide financial assistance to customers who can’t pay their water bills and to prevent service disconnections.

FAIRFIELD – Sen. Bill Dodd, D-Napa, commended Fairfield and Vacaville police officers today for their handling of an 18-hour-long, armed standoff that ended peacefully with the arrest of a man accused of threatening his parents with a knife.

SACRAMENTO – Sen. Bill Dodd, D-Napa, issued the following statement today regarding the impeachment of President Donald Trump on a charge that he incited an insurrection Jan. 6 when encouraged his supporters to storm the U.S. Capitol:

“The president must be held accountable for this outrageous attack on our democratic system of government,” Sen. Dodd said. “Impeachment was the appropriate response to this unconscionable act. It sends a strong message that the American people will not allow anyone, even the president, to undermine our republic.”

“While many do the right thing, too often we have seen contractors who do not carry workers’ compensation insurance,” Sen. Bill Dodd said. “My bill will eliminate barriers to coverage so we can protect those employees who might be injured on the job.”

SACRAMENTO – Sen. Bill Dodd, D-Napa, introduced legislation today to improve the reliability of California’s electricity grid, preventing rolling blackouts such as those that left hundreds of thousands of residents without power during summer and fall heatwaves.